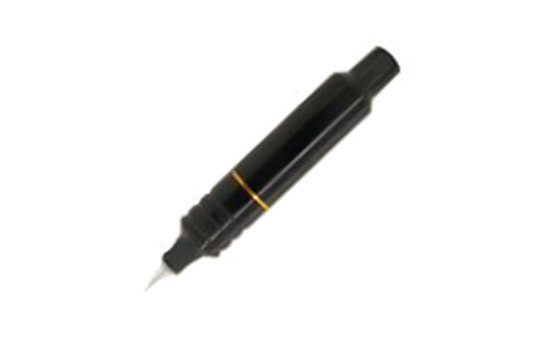 rA tattoo Pen is a hand-held device generally used to create a tattoo, a permanent marking of the skin with indelible ink. Modern tattoo machines use electromagnetic coils to move an armature bar up and down. Connected to the armature bar is a barred needle grouping that pushes ink into the skin. Tattoo artists generally use the term “machine”, or even “iron”, to refer to their equipment. The word “gun” is often used but many tattoo professionals dislike it. In addition to “coiled” tattoo machine, there are also Rotary Tattoo Machines, which are powered by regulated motors rather than electromagnetic coils. “The basic machine is pretty much unchanged today, in recent years variations of the theme have crept into the market, namely Manfred Kohr’s Rotary machine of 1976 or Carson Hill’s pneumatic machine that uses compressed air rather than electricity, but the principle is essentially the same.”

The predecessor to the tattoo machine was the electric pen invented by Thomas Alva Edison and patented under the title Stencil-Pens in Newark, New Jersey, the United States in 1876.[2] It was originally intended to be used as a duplicating device, but in 1891, Samuel O’Reilly discovered that Edison’s machine could be modified and used to introduce ink into the skin, and later patented a tube and needle system to provide an ink reservoir.

While O’Reilly’s machine was based on the tattoo rotary technology of Edison’s device, modern tattoo machines use electromagnets. The first machine based on this technology was a single coil machine patented by Thomas Riley of London, just twenty days after O’Reilly filed the patent for his rotary machine. For his machine, Riley placed a modified doorbell assembly in a brass box. The modern two-coil configuration was patented by Alfred Charles South, also of London. Because it was so heavy, a spring was often attached to the top of the machine and the ceiling to take most of the weight off the operator’s hand.

Most modern tattoo machines can control needle depth, speed, and force of application, which has allowed tattooing to become a very precise art form. Such advances in precision have also produced a style of facial tattooing that has attained mainstream popularity in America called dermapigmentation, or “permanent cosmetics” creating results such as addition/removal of freckles, beauty spots, and scars.